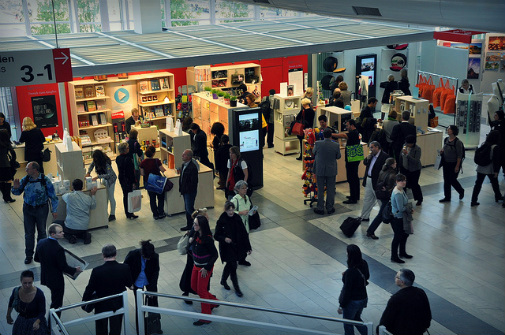 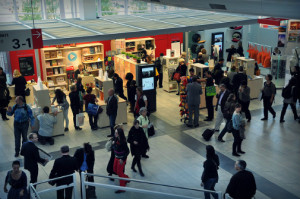 Mid-October in the publishing calendar can only mean one thing: the Frankfurt Book Fair. The world’s biggest and busiest trade fair for books, which is underway now, attracts thousands of industry experts looking to launch books, talk trends, strike deals and network like crazy. Here, we lift the lid on a 500-year-old event that’s looking resolutely to the future.

For five days every year, the German city of Frankfurt – best known as Europe’s largest financial hub – comes alive with thousands of media types from all over the world. Here, in several vast halls, publishers, agents, authors, booksellers and many other industry experts get together to celebrate and sell books, in all their many forms.

In a spectacular show that puts the London Book Fair firmly in the shade, the FBF involves 7,300 exhibitors, 280,000 attendees and 9,000 journalists, who gather for a book-marketing opportunity of epic proportions.

The fair’s mind-boggling agenda includes some 4,000 talks, readings, demos, panel discussion and seminars, among other things. And that’s not to mention the – literally, countless – individual meetings that take place between attendees from a total of 110 different countries. It’s a colourful event of almost unimaginable scope.

The book fair’s tagline is “A Global City of Ideas”, and it’s more than living up to that claim. This year, organisers have placed a renewed emphasis on the international markets, with exhibitors from India, the rest of Asia and the Arab world occupying a much more central position in the halls, near the English-language zones. The new layout is designed to allow attendees to tap into the growing potential of these markets much more easily.

As FBF director, Juergen Boos, says: “What we’re doing is mirroring what’s happening in the industry. Asia is a strong growth market and it makes sense for the publishers to be closer to the English-language markets and the Germans.”

In keeping with this Asian focus, the guest of honour at this year’s event is Indonesia, which is taking the opportunity to showcase everything from science fiction and poetry to batik and shadow dance.

As always, globalisation and digitisation are dominant themes at the fair, although the tired fixation on whether or not technology will sound the death knell for physical books is likely to be on the back-burner, thanks to a recent boom in print sales.

The focus, instead, is on evolving mobile technologies – how to keep up with them, capitalise on them and make them work for publishers. It’ll be an interesting debate, especially given the news earlier this autumn about a game-changing new website from India that’s doing just this.

As ever, children are in the spotlight at the fair, where dozens of talks, meetings and discussions are focusing on young readers and learning. More than 900 publishers, technology suppliers and other big players from the education space are thought to be in attendance.

The captivating Classroom of the Future exhibit, now in its fourth year, imagines the learning tools of tomorrow, including 3D printers, fully “immersive”, multisensory workstations and hybrid textbooks (which combine print and digital elements). It’s an exciting vision that recasts teachers and publishers as potential architects of the learning experience, rather than simply providers of information.

As Martina Wolff de Carrasco, who came up with the idea for the exhibit, says: “The goal is to show that education can be innovative and international, and publishers can find new ways of delivering material in the future.”

An exciting event for anyone in the publishing business, the FBF is a place where contacts are made, deals are struck and competition surreptitiously weighed up – in lecture halls, at meeting tables or down any number of nameless corridors.

Time and time again, under the glaring strip lights of one of Europe’s largest, hottest and busiest exhibition centres, the bedrock of future business is formed for publishers big and small.

Our very own Mike Payton is at the fair and will be posting updates on our Twitter and Facebook pages. Check in to see what’s going on!

Thanks to Picturepest for the image.