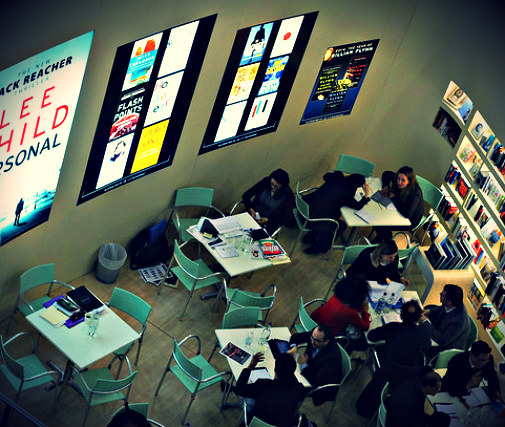 It’s that time of year again, when publishers and other industry experts from all over the world gear up for the annual London Book Fair – the second-largest publishing trade fair in the world after Frankfurt. And with LBF 2016 kicking off next month at Olympia in West London, now’s your chance to grab a ticket and prepare for a mesmerising modern-day marketplace of epic proportions.

The London Book Fair, which started life as a trade show for librarians 45 years ago, is now a media mecca on a truly global scale. The event attracts more than 25,000 publishers, booksellers, literary agents, librarians and media suppliers from at least 100 different countries, features 1,700 stand-holders and offers an action-packed calendar of 300-plus seminars, talks and micro-events.

As David Shelley, CEO of Little, Brown and Orion, recently said: “I think LBF is getting more significant all the time…it really feels like a fair to rival Frankfurt. I think certainly, in terms of books, there are noticeably more every year – and more big submissions. I do feel that there is a real buzz about it and that [buzz] seems to be growing all the time.”

So what’s generating the buzz at LBF 2016? Here’s a quick rundown.

To mark the 400th anniversary of Shakespeare’s death and to honour his incalculable impact on publishing and the arts, LBF 2016 will launch The Shakesperience – a special focus on the Bard, including performances of his much-loved works.

Also new this year are the Literary Festival Award, the Book Store Awardand the Trailblazer Awards, which will recognise publishing talent among the under-30s. These three prizes are part of the event’s International Excellence Awards, now in their third year, which are designed to celebrate publishing innovation and success across the world.

After its popularity last year, the Scholarly and Research Publishing Forumwill be back at LBF 2016. This half-day event addresses the current opportunities and challenges in academic and scholarly publishing, from the disrupting force of digital technologies to the different approaches to funding higher education. The spotlight, this time, will be on the challenges and trends facing research communication.

You can also expect a reappearance of the education conference What Works? Successful Education Policies, Resources and Technologies, which, this year, will examine the impact of new technologies on the curriculum and education standards.

A hotbed of networking, publicity, rights negotiations and distribution deals, the eagerly anticipated event is – for many businesses and individuals – absolutely critical to making contacts and building future business. Whether it’s a scheduled meeting, an inspiring lecture or a chance meeting in the maze of corridors that works its way between the countless stands, doors tend to open at the LBF; this is a place where plans are made, deals are stuck and people gaze ambitiously into the future.

And that’s why the Out of House team will be there on each day of the conference – to talk about our business, hear about yours and discover exciting opportunities for collaboration. Whether you need support producing your next academic, education or reference title, advice on XML workflows and eBook conversion, or simply want to discuss digital trends and publishing news, we’d love to meet you!

Thanks to ActuaLitté for the image.