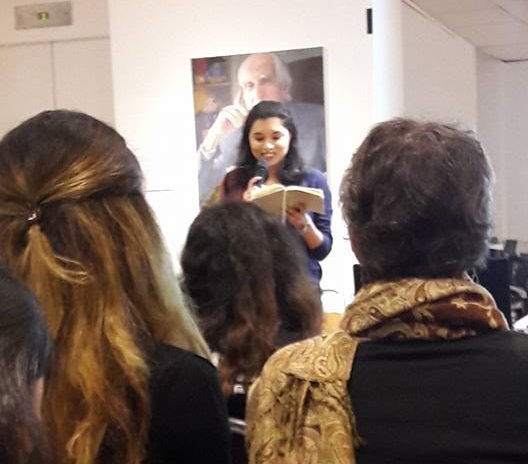 A few weeks ago now, I took a trip to the Big Smoke to watch our very own Zeba Talkhani chair a near-jam-packed mini-conference entitled Muslim Women Speak. Dedicated to raising the profile and turning up the volume of such voices, the event was held in the basement gallery of Waterstones Gower Street, and featured some of the most inspiring and engaging speakers I’ve seen for a while. (A Twitter thread featuring all the speakers, and Zeba herself, can be found here.)

The first speaker to take the stage was Shagufta K Iqbal, a poet, writer and theatre-maker, who read some of her work before treating the audience (who had piled into the event space to listen, many peering out from behind columns) to a harrowing film made as the result of her postgraduate research. This film, Borders (a trailer for which can be found here), mixed image with poetry to tell of the horrifying experience of Asian women entering Britain in the 1970s, many of whom were subjected to horrifyingly intrusive ‘marriage tests’ (a glorified virginity check), which were subsequently hushed up by the Home Office. Hearing of the suspected numbers this barbaric procedure was inflicted upon (the current figure stands at around 80, but the actual number is, and shall probably remain, unknown), it was clear that, though steps have been taken, society still has a great distance to travel before true equality could be reached.

Azi Ahmed took the stage next, an entrepreneur and author who spoke of her experiences as a young woman training, with no prior military experience, at the Chelsea barracks to join the SAS at a time when deep-rooted ethnic and gender prejudices made such a goal seemingly untenable. It was thrilling to hear of how, despite the lack of halal rationing, her slight frame, and feelings of social exclusion, Azi rallied against adversity to complete her training.

Next to speak was Hala Abdullah, a poet and writer who told the amassed crowd of how she co-founded a truly inspirational writing club in Saudi Arabia. The Riyadh Writing Club, founded in 2010, exists to draw together the talented female writers of Riyadh and provide them with a safe and supportive forum in which to experiment with their technique and form – no small feat given that it’s illegal for attendees to drive themselves to the venue.

Finally, the time came for the headline act, so to speak. The captivating Muslim Women Speak publishing panel brought together Sarah Shaffi, online editor of The Bookseller (as chair); Hajera Memon from the innovative Shade7 Publishing, which produces high quality novelty Islamic-themed books for children (one of which, a colour-changing bath book, sounds particularly brilliant); Azi Ahmed, who returned to share her perspective as an author embarking upon the industry; and Azmina Siddique, Global Risk Analysis editor and former Middle East Editor with our friends at I.B. Tauris. These four speakers discussed topics ranging from the difficulties they faced in their chosen fields and their aspirations for themselves, both within and without the publishing industry. For example, Hajera Memon is hoping to continue to create beautifully illustrated religious stories for children and Azi Ahmed has begun her campaign to become MP for Rochdale.

We’re all looking forward to Zeba’s next event, an evening with Rowan Hisayo Buchanan, the author of the brilliant Harmless Like You, which was shortlisted for the 2016 BAMB Readers Award for Breakthrough Author. It’s closer to home this time, in Cheltenham at The Suffolk Anthology.